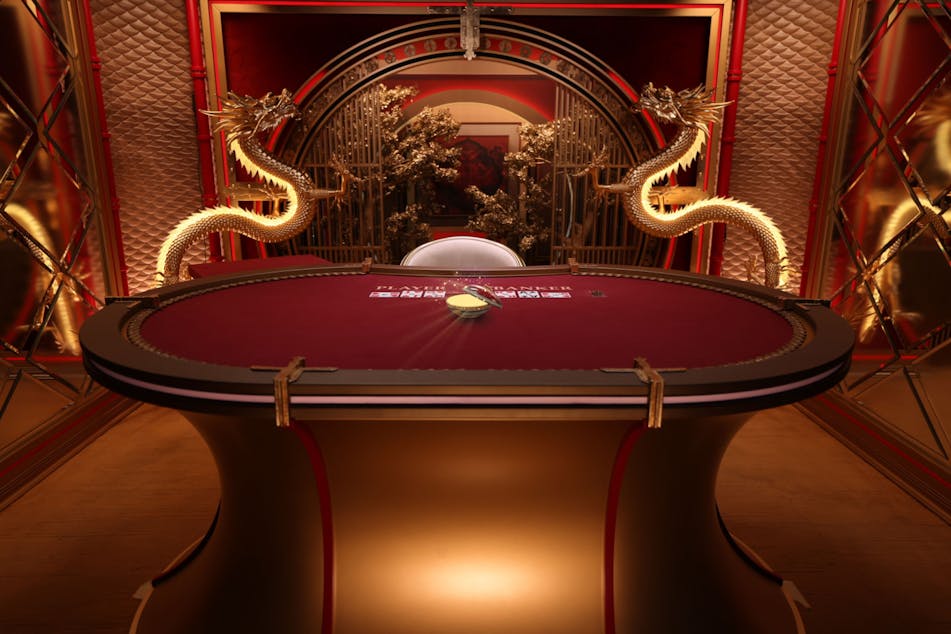 Evolution Gaming has done it again with Golden Wealth Baccarat, a unique take on one of the most timeless casino games. Get ready to be immersed in an Asian-style casino gaming experience with the promise of taking home big wins and take advantage of multipliers in every round. You’re off to participate in a top-notch live dealer title, so hit play now and have a Crazy Time and massive wins!

Paired with a sophisticated setting that feels like you’re one of the high-rollers, Golden Wealth Baccarat takes you to the Orient along with its magic pot. And before the game allows you to place your wagers, it sprinkles golden stardust across the table for maximum luck and wealth!

How to play Golden Wealth Baccarat

Golden Wealth Baccarat Live is a live dealer title from Evolution Gaming operating on an RNG-augmented reality. It is almost similar to Lightning Baccarat, except it gives you higher odds of doubling your bets in every round.

The game follows the rules of standard baccarat, but in Golden Wealth Baccarat, the players are given additional five multiplier cards in every round. If luck is truly on your side, your payouts can skyrocket up to 262,144x your wager on a tied hand result.

So, how exactly do you play Golden Wealth Baccarat Live and double your bets? Here’s how:

Once the betting time begins, all the players should either place their bets on the Banker, Player or Tie. There are also optional side bets for the Banker and Player pairs.

You can wager anywhere from 0.05 mBTC to 50 mBTC. When the betting phase has officially ended, a 20% fee will be added to every player’s total bet amount for entry to the Golden Round where the five Golden Cards are selected.

Step 2: The Golden Round

Also referred to as the Golden Card Reveal, the Golden Round is the part where a total of five cards are randomly picked. Each of the cards will be assigned with a multiplier ranging from 2x, 3x, 5x and 8x.

When the game is finished generating cards and multipliers, they will be handed over to the participants of the round.

During this stage, the croupier deals two or three cards to the Banker and the Player, depending on their hand total. If there is a Golden Card that appears during the dealing process, it will be highlighted along with its multiplier value.

Step 4: The moment of truth

Since Golden Wealth Baccarat follows the standard rules of baccarat, the hand with a value closest to nine will be declared as the winner. The payout that can win is calculated depending on whether your hand contains a Golden Card.

For instance, if you manage to be dealt with Golden Cards with 2x and 8x multipliers, then your total payout would be 16x. If your hand value contains three 8x golden cards, you will be rewarded with a payout of 512x your bet!

The game also gives you a chance to win a whopping 262,144x if you have matching six golden cards, with each card carrying an 8x multiplier then you will be rewarded with the same amount.

Once you enter the game of Golden Wealth Baccarat, you will be welcomed with a studio decorated in red and gold—a blatant nod to the Orient. There is a table with a red fabric surface, golden dragons in the background and a lively live dealer supervising the game, making the atmosphere buzzing with excitement and wins!

On the table, there is a 52 deck of cards placed inside a dealing shoe. At the centre, you can find an animated magical golden pot where the five multiplier cards are drawn. There’s no denying that with Golden Wealth Baccarat, players will fully embrace higher potential wins within a sophisticated live studio that feels like you’re at the heart of Macau!

What makes Golden Wealth Baccarat superior to other live dealer titles found online is it gives you plenty of opportunities to multiply your bets.

With Golden Cards, various multiplier levels and an RTP of 98.85%, you’re all set to take home the magical pot and become the next high roller. Unleash your luck and set of strategies like you’re playing Gonzo’s Treasure Hunt and let things Cash or Crash!