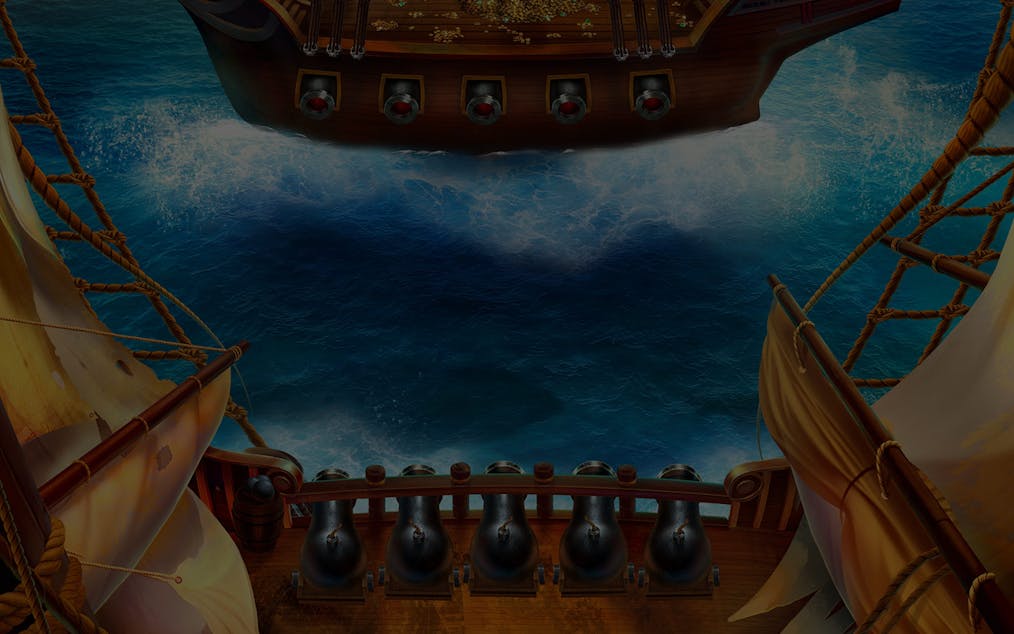 A pirate’s life is full of endless thrills from the moment you awaken to the moment you strike treasure. The casino slot Pirates’ Plenty Battle For Gold is a full realization of the pirate life as it takes you on a journey across the seven seas in search of gold beyond your wildest dreams.

Captain Blackjack and his Wild Monkeys needs your help to navigate the Wild Island Row in search of treasure the likes of which the world has never seen. Blast enemy ships straight to Davy Jones’ locker with your Cannons and celebrate after with a quick Bottle o’ Rum.

Weigh anchor and get the chance to become the richest corsair this side of the Atlantic with a potential booty of up to m₿ 55,000 as you play the Pirates’ Plenty Battle for Gold bitcoin slot.

The basic symbols are the deck suits. These are the Clubs, Diamonds, Hearts, and Spades. Each has its own payouts for every winning combination based on the max bet:

The high-paying symbols are various pirate paraphernalia. Each has its own payouts for every winning combination based on the max bet:

*Getting 2 Pirate Skulls gives you up to 9.

The Pirates’ Plenty Battle for Gold bitcoin slot represents its Wild symbols with a token displaying the word ‘Wild’. There are 5 variants of the Wild symbol. These are the regular Wild, x2 Wild, x3 Wild, x4 Wild, and x5 Wild. All of them substitute paying symbols and if a multiplier is displayed, your winnings are also multiplied by the appropriate amount. Getting 5 Wild symbols gives you up to 600.

You can win Wild symbols with the ‘FIRE!’ Symbol or during Battle Spins. Additionally, when you unlock the Wild Island Row, Wild symbols randomly land on the slot.

The Map represents the special Map symbol. Getting enough of them unlocks the Wild Island Row and it remains open for the remainder of your spins of the same stake.

When at least 3 Battle Spins symbols land, you win free Battle Spins. During Battle Spins, a special ‘FIRE!’ symbol can land and give you extra spins and sticky Wild symbols. Additionally, Captain Blackbeard can also throw a random number of Wild Bombs on the slot within the duration.

Pirates’ Plenty Battle for Gold: All That Glitters

A favourite theme among casino slot game providers is pirates but none execute it as well as Red Tiger with their Pirates’ Plenty Battle for Gold bitcoin slot. It’s set below deck on Captain Blackbeard’s ship where they store their loot and weaponry. The slot is seen through a great window that grants a beautiful view of the vast ocean and the lush, mountainous islands that frame it. High in the sky, thick blue clouds glow from the twilight sun’s purple and orange radiance.

The symbols at play have all been generously decorated with glittering gold that shines as they glide across the reels. The pirate hat’s hems and the skull’s features have also been decorated with freshly-melted gold. Even the bottle of rum looks as though it’s been infused with liquid gold.

The music composed of an orchestra of string instruments bring the pirate fantasy to life, hyping and scratching your itch for adventure and incredible pirate booty.

The pirates’ code dictates that loyalty, bravery, and tenacity are essential for any pirate worth their coin. The same goes for the Pirates’ plenty Battle for Gold bitcoin slot. As you brave the vast oceans and the Ten Elements, never forget where you once started. Humble beginnings can often lead you in the right direction. You’ll be swimming in gold worth up to m₿ 55,000 faster than you can say ‘arr’ as you play Red Tiger’s casino slot Pirates’ Plenty Battle for Gold.

There’s even more treasure to sink your teeth into out on the open seas, so don’t hesitate to dive into the nautical abyss in search of the Pirates’ Plenty and the sunken treasures that await you.