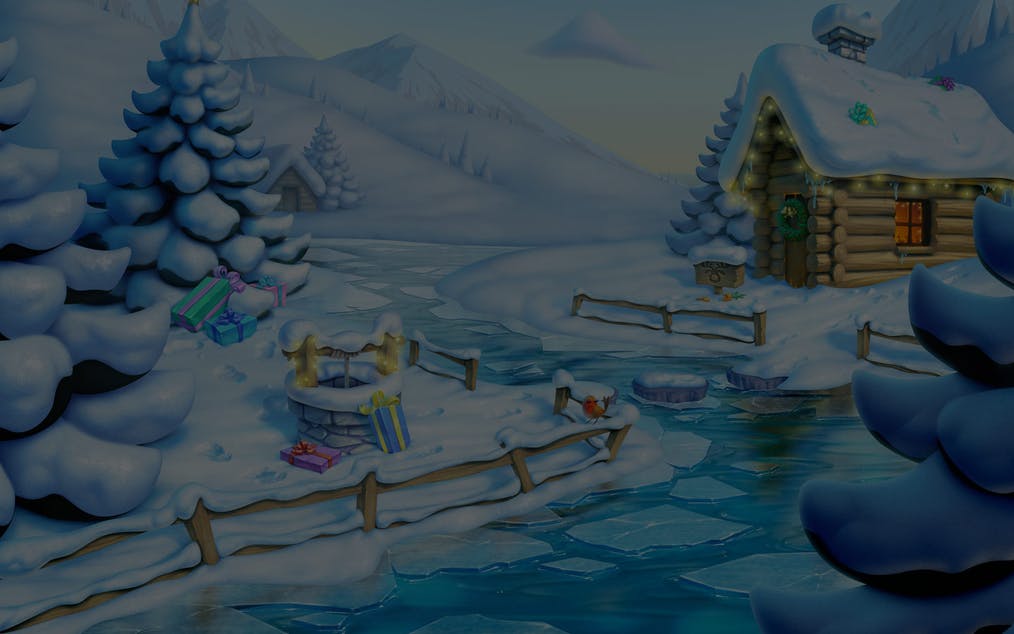 One funny thing about the Christmas season: the phrase ‘on a diet’ seems to miraculously disappear from everyone’s vocabulary. No one relates to this better than Fat Santa! After all, what did you think he was hiding under that big red coat of his? The jolly man insists it’s not a big belly, but you know better!

Fat Santa should really cut down on those Christmas pies because it’s not looking good for his reindeers who have to carry him across the world on Christmas Eve. You can’t blame him when the banquet table is filled with delectable treats, massive payouts and bonus features in casino slot Fat Santa!

Feel the Christmas spirit warm-up your numbed fingers and get ready to have yourself a merry little Christmas with Santa’s elves and reindeers in Fat Santa bitcoin slot. You’re welcome to spin the reels in this winter wonderland and get the chance to unwrap presents containing prizes 6,400x your stake. The more, the merrier and the fewer pies Fat Santa will have all for himself!

It’s the most wonderful time of the year in casino slot Fat Santa’s 5-reel and 50-payline game format. Spin the reels at an RTP of 96.45% amidst the Christmas lights and yuletide decorations.

Get the chance to fill your Christmas tree with gifts, presents and merry rewards with Fat Santa bitcoin slot’s generous features and free spins. Start singing those Christmas carols by wagering a minimum bet of €0.25 up to a maximum bet of €25.

Christmas balls dipped in different colours and marked with suit cards serve as the slot’s low-paying symbols. Find clovers, diamonds, hearts and spades engraved on the balls’ glossy surface in every spin of the reels.

Each set of balls has its own payout depending on the following winning combinations if you wager the maximum bet:

In Santa’s winter wonderland, they never bring down the decorations no matter what month of the year! Christmas decorations and familiar symbols litter the reels as the high-paying symbols.

Find a blue-and-red Christmas present, a snowman, Rudolf the red-nosed reindeer and Santa’s Elf in every spin of the reels. Each set of symbols has its own payout depending on the following winning combinations if you wager the maximum bet:

All Is Bright With Wilds and Scatters

Fat Santa himself in all his adorable and chubby glory appears on the reels as the Wild symbol. He can substitute all symbols except Scatter to complete paylines. Fat Santa serves as the highest-paying symbol along with the Elf symbol.

Each set of Fat Santa symbols has its own payout depending on the following winning combinations if you wager the maximum bet:

Wherever you go in the North Pole, you can find Christmas pies scattered almost everywhere! You already know who’s the culprit. These delicious winter desserts serve as the slot’s Scatter symbol. During the Free Games, the Christmas Pie symbol also can also appear as a wild variation. These two symbols substitute all paying symbols except Fat Santa.

Be Merry With Bonus Features

During the base game, the Santa’s Sleigh feature can randomly activate while the reels are still spinning. Keep your eyes peeled because Santa’s red and gold sleigh can fly over the reels and throw snowballs of rewards onto your reels. These snowballs will land on random positions on the reels and replace symbols with the Christmas Pie Wild.

The Christmas Pie Wild remains in place until the next spin. After the spin that triggered the Santa Sleigh’s feature, the Christmas Pie will turn back into basic symbols.

Fat Santa is always jolly, but what makes him the happiest is his favourite Christmas Pie! Watch him indulge his insatiable appetite with these treats when you land the Santa symbol and Christmas Pie symbol simultaneously anywhere on the reels. Whenever he’s in a good mood, Fat Santa is also inexplicably generous—that means Free Spins for everyone!

During the Free Games feature, Fat Santa’s symbol scurries towards the Christmas Pie symbols and collects each and every one of the pies into his wide mouth. If you think the elves can’t keep count of Santa’s eating galore, then you’ll be surprised! At the bottom of the reels, the Christmas Pie meter tracks the number of Christmas Pies symbol Santa has consumed.

More pies mean a bigger belly for Santa and bigger rewards for you! Fill the Christmas Pie and Fat Santa will increase and grow bigger! After he indulges his appetite, Fat Santa will gladly share his blessings with you by sharing additional Free Spins.

If you want to give Santa a Christmas present, press the Buy Feature button to immediately reward Santa with all of the pies he could ever want! The Buy Feature instantly activates the Free Games feature at a cost of 80x your current bet amount. It’s such a small price to pay for the privilege of seeing Santa’s full tummy and happy grin!

Visit Fat Santa’s cosy and welcoming cottage located in the heart of the North Pole in this Christmas-themed bitcoin slot. Nostalgic winter decorations and icons such as Christmas balls, beautifully wrapped gifts, pies, a snowman, Rudolf and Santa himself grace the reels in each frozen spin. A thin sheet of clear ice serves as the slot’s reels while a beautiful landscape of snow-covered mountains and pine trees serves as the backdrop.

With dynamic features such as Santa’s Sleigh, Christmas Pie Meter and Free Spins, there’s an avalanche of opportunities waiting for you when you spin the reels in casino slot Fat Santa. All that pie Fat Santa has eaten puts him in a good mood, so everyone’s on the ‘Nice Kids’ list including you! Be rewarded with bonus features and massive payouts that’ll pave the snow towards the jackpot prize worth 6,400x your stake!

Stay for the duration of the holidays in Fat Santa bitcoin slot and help Santa free his Jammin’ Jars of pudding from the ice and earn the title ‘Ice Breaker of the North.’ The longer you stay in the North Pole, the more snowball of prizes can be thrown your way!