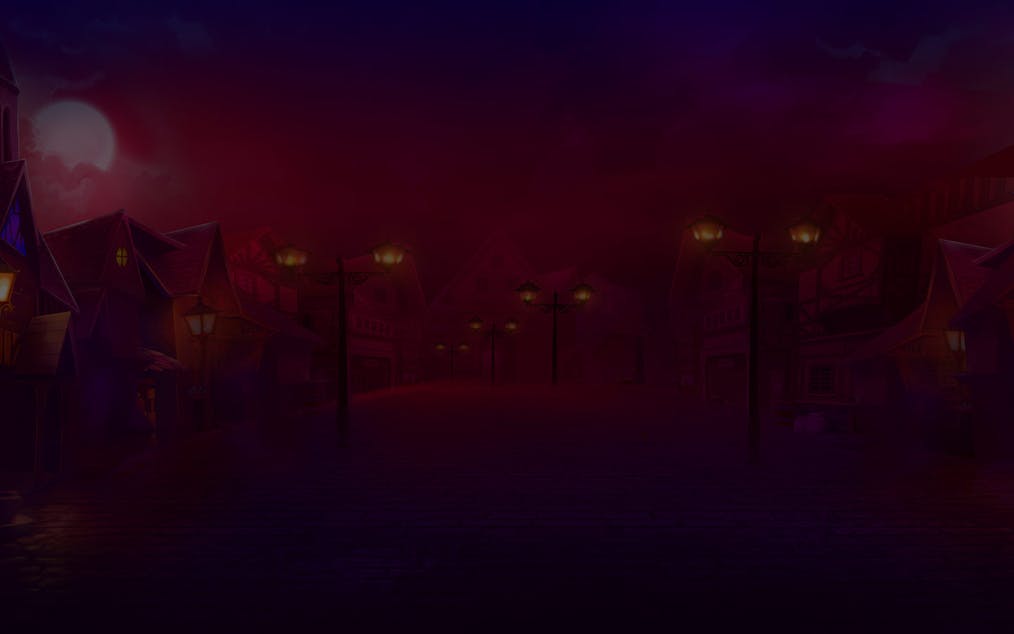 Every once in a while, the moon turns red and awakens creatures that thrive in the dark. Witness as the wolves and vampires take up arms to settle their centuries-old strife in Vampires vs Wolves bitcoin slot.

Wager and get a chance to win a jackpot win of up to 1,000x your wager. Watch as the two clash to take home the glory using your mobile phone, tablet, and PC.

Vampires vs Wolves: Watch Out for the Children of the Night

Blood, carnage, and sacrifice is what you will witness in casino slot Vampires vs Wolves. Red will colour the moon as you witness the fight between two of the most powerful beings in the realm of the supernatural. Wager between 0.01 and 100 coins and pick a side because it will be a long night of screams inside the warzone of the vampires and wolves!

Witness the power of these creatures when you spin at an RTP of 96.49%. Pick the winning side because these creatures have various bonuses and features that can increase your payouts! If you earn their trust and loyalty, they might give a potential win of up to 1,000x your stake!

Blood, sweat, and grit is what it takes to conquer an enemy. In war, there are no second chances. That's why these creatures will use magical gems to increase their power and supernatural abilities. To get hold of this energy, the wolves and vampires need to collect the different coloured gems scattered across the reels.

Hunt for the spades, diamonds, clubs, and hearts and you will hold power and payouts that can shake these creatures to their core. Hit winning lines with these jewels and you can obtain the following payouts based on the maximum wager you place:

The strife between the vampires and wolves has been ongoing for centuries. Because of this, each clan has trained the best fighters to defend their kind. When you meet the members of the coven, you will see these war experts grace the reels with their otherworldly beauty and charm.

The vampire clan has trained the Jade-haired Vampiress and the Purple-haired Vampiress as its war consultants. For the wolf pack, they have the Auburn Werewolf and the Lycan Lady. These creatures will grant you payouts based on the maximum wager you stake:

Both clans are ruled by experienced and powerful warlords. These leaders are the ones who make the strategies in war. Meet the Alpha Wolf and the Vampire Lord that leads the two clans. Give them your wager because they can give you high payouts based on the maximum wager you stake:

Casino slot Vampires vs Wolves has a wild symbol that can double your wins when it makes an appearance on the reels. This wild symbol can substitute the basic, standard and high-paying symbols in the game to form more winning combinations for you. When the symbol shows up on the reels it can give you the chance to obtain the following rewards:

The clans will do whatever it takes to get you to give them your loyalty and support. To ensure this, each clan will show off their Scatter Symbol that can give you the power to obtain Free Spins. Each Scatter represents the clans’ insignia. For the vampires, you will see an ancient Victorian castle, while the wolves feature a symbol of a wolf howling at the moon. These symbols will only appear on reels 1 and 5 as an expanded symbol.

Vampires and Wolves: Thrive Under the Moonlight

The Vampires and Wolves are both creatures of the night. Each of them needs the moonlight to sustain their power and supernatural energies. Channel the energy emitted by the moon in casino slot Vampires vs Wolves because triggering the moon’s powers can grant you prizes like Free Spins, the Lycan Wild Symbol Bonus, and the Vampire Sticky Bonus.

When the Expanding Scatter covers the first and fifth reel, it will trigger the Free Spins feature in Vampires vs Wolves bitcoin slot. Triggering this feature will expand your chances of obtaining substantial payouts giving you the chance to select between the Vampire Sticky Wilds and Lycans Wild Symbol Bonus.

Selecting the Vampire Sticky Wilds Bonus will give you the chance to have 8 Free Spins during the expanded scatters symbol. During this feature in Vampires vs Wolves bitcoin slot, the vampire symbols replace both standard and high paying and transform into a sticky symbol that will change random symbols into wilds and grant you more winning combinations.

The Lycan Wild Symbol in Vampires vs Wolves acts as the symbol for the Lycan clan. When this symbol lands on reel 1 and 5, it can grant you with a whopping 14 Free Spins to boost your payouts. During this feature round, the werewolf symbols can substitute both standard and high paying that will unleash their predatory side to transform into wild symbols that can replace all the symbols in the game to create more winning combinations!

The foggy Victorian village sleeps quietly, unaware of the supernatural beings battling each other for blood and glory. Enter the village and allow the power of the two clans run through your veins as you crank the dark reels of this video slot created by Pragmatic Play.

Watch the sky turn from purple to red as the two clans fight to go home victorious from the centuries-old dispute between them. Let your deadly and animal side awaken when you see the moon glowing against the blood-red sky. Both clans get their power from the moon to increase their power. Use this opportunity because the moon can trigger bonuses and features that further increase your payouts!

The Lycan pack has one of the most skilled and powerful warriors. Meet the beautiful Auburn-haired wolf and the Red-haired Lycan lady as they grace the reels with their ethereal beauty. Don’t flinch when they stare at you because their cold, yellow eyes are as piercing as their sharp claws.

The vampires have been roaming the earth for thousands of years. You will not detect any lines or signs of aging on their faces because their skin is as smooth as marble under the moonlight. The leader of the vampire clan will appear on the reels with a smug look on his face.

Vampires vs Wolves: Roam the Earth With the Supernatural

High-quality visuals and realistic sounds will engage you more to spin the reels of this unique video slot by Pragmatic Play. Join the two clans as they battle their way to glory, blood, and wins in casino slot Vampires vs Wolves.

Witness a war that will be remembered for years when you conquer the reels with the vampires and wolves. If you pick a side and remain loyal to it, they might grant you a potential win of up to 1,000x your stake along with powerful features and bonuses that can wake the ancients in Vampires vs Wolves bitcoin slot.

Journey the West and discover more treasures and Wild Spells that can increase your wins!