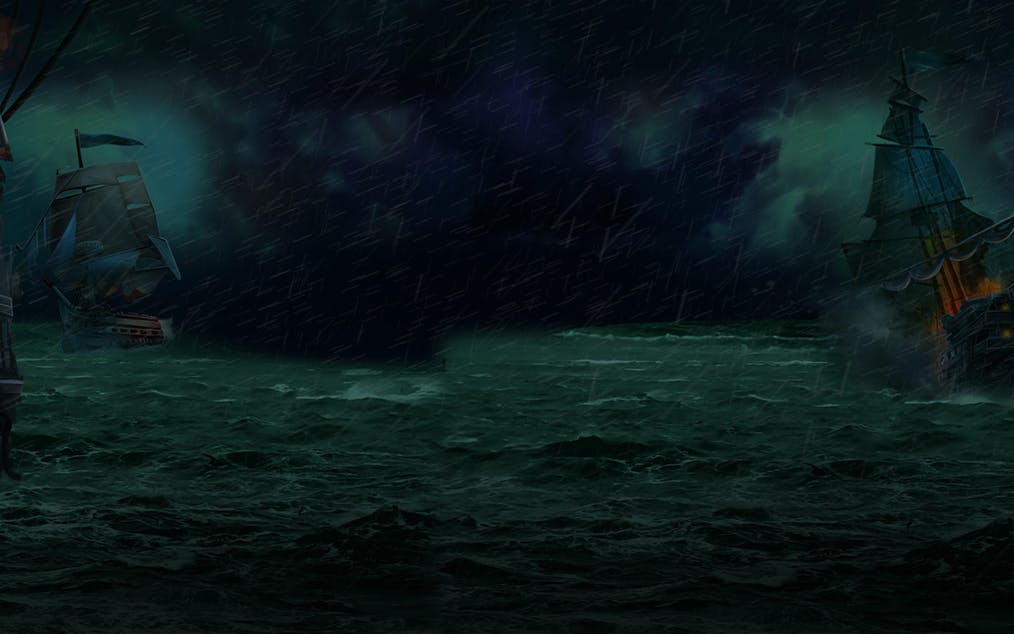 Pirate Gold is an adventure-filled slots game that will take you on a journey on the seven seas. It has an enchanting photo-realistic game background of a mist-shrouded harbour, sunset, and mountains.

The moving waves and ships in the harbour make it seem like you are there. The game will take you on an adventure filled with treasures. The reel is filled with pirate-related things like hooks, treasures, maps, and pirate ships. It’s an engaging, treasure-filled adventure.

Hooking on to Pirate Gold

You will find that it is easy to understand this 5 reel game with 40 fixed paylines. You can play the game on desktop, mobile, and tablet for 0.40 coins and up to 200 coins. There are 10 different icons when you join the pirates on their search for treasure.

Pirate Gold uses symbols that are easily connected to pirates. Each symbol has its own combination and corresponding winnings. They are as follows:

The Treasure Box represents a Wild Symbol and can substitute for all of the others except for the Bonus and Money Symbols. Free Spins are given whenever 3 of the Bonus Symbol appear on the board at the same time. The Money Symbol takes random values from a predefined set or a Minor/Major Jackpot values.

There are 5 reels on the game and 40 fixed paylines. Aside from the regular icons, you see on the reel, there is also the Bonus icon that serves as a Scatter Symbol. Getting 3 of these Bonus icons triggers 10 Free Spins.

During the free spins, The Male and Female Pirate transforms into Wild icons. The Lucky Treasure Bag only starts after‌ ‌all the lines of combinations are paid. The normal reels then replaced with special reels containing only Money Symbols, Retrigger Symbols, Multiplier Symbols and empty spaces.

When a Retrigger Symbol appears after the current round, a new Lucky Treasure Bag Round is awarded and it will start from the beginning. You will notice that it will be the same starting Money Symbols Grid as the initial round.

When the Lucky Treasure Bag feature is complete, the values on the Money Symbols are to be added and the game will pay for the total amount. It will also be multiplied by the total multiplier. You will also win a Grand Jackpot if all 20 of the grids are filled.

All symbols pay from left to right on selected paylines. All your wins are to be multiplied by your bet per line. All the values expressed in coins are as actual wins. Only your highest win is to be paid per line. When you win multiple lines, all of it is to be added to your total winning. Free Spin wins are to be awarded to you after the round is completed. It will also be added to your payline win.

Pirate Gold is visually appealing. The blend of photo-realism and cartoon-like graphics work quite well. The game is set on a misty harbour with ships docked on both sides of the reel set. You will see the motion of the waves on the background along with other elements, such as the sunset, some houses, trees and mountains.

The reels are set on a wooden frame with a fixed display of your bet at the bottom of the window. Lanterns on the side of the reels are swaying as if you're aboard a ship that is out on the sea. The background music also takes you on an adventure. It brings out a sense of being on a journey to find hidden treasures. It has your blood pumping for a win. All in all, the overall look of the game make you feel like you are on an adventure with pirates as you search for gold.

The Booty of Pirates Gold

You will be hooked on its pirate theme that you will never have enough of the game. The treasures are so vast that a single round of the game will never be enough. The characters will remind you of a certain carefree pirate and his girlfriend as they go out on an adventure to find missing treasures. You can win as much as 1,000x your stake when you hit the jackpot on the game. Since you can retrigger the Money Symbols as many times as the game permits, your wins can grow. You can discover treasure whenever you play Pirate Gold.