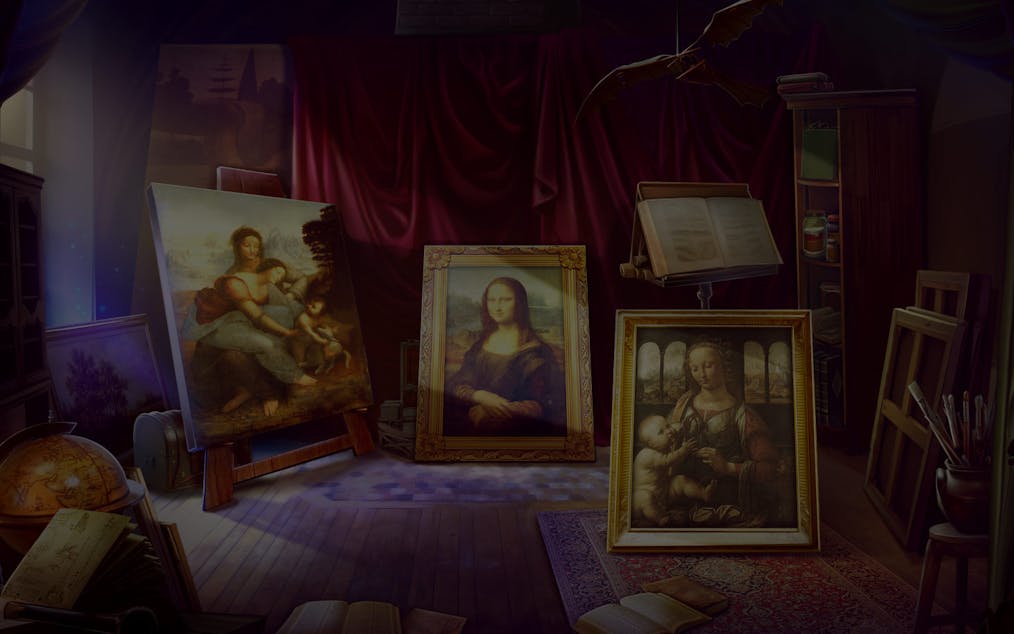 Embark with John Hunter in his gripping search for the secrets behind Leonardo Da Vinci’s treasures at this casino slots game. With a chance to win a maximum of 48,000x your bet, get ready to experience an adventurous quest, art appreciation, and a lot of spins and risk-taking.

With 25 chances to win, Da Vinci’s Treasure Bitcoin Slot will keep you craving the hunt.

Da Vinci’s Treasure is a 5-reel, 25-payline video slots game that has a jackpot of 48,000x the amount you bet. It has an RTP rate of 96.53% and high volatility percentage. You’ll have the opportunity to get bigger wins in a shorter time period. Pack your bags and begin your adventure now!

The game consists of three premium symbols, two mid-value symbols, and six standards symbols. The premium symbols are distinguishable because they are enclosed in a silver vault, except John Hunter himself. His character is inside a golden frame. Below are their corresponding payouts:

These two mid-value symbols are the second-highest paying objects that can be found in the reels. They are also must-haves during quests, because you never know when you’ll need to shoot something or predict the position of heavenly bodies. The following symbols pay out:

Standard symbols are the most commonly seen object in the reels. But even though they are common, they can give out decent payouts especially when matched with a Wild symbol. Standard symbols have the following payouts:

It will come as no surprise that Da Vinci himself is a symbol. He represents the Wild symbol that can substitute all symbols except for the Bonus. Da Vinci appears on reels 2 through 5.

The Bonus symbol is a Cryptex—a cylindrical vault that carries secret messages. Fun fact: Da Vinci invented the Cryptex, which makes sense given that the goal of the game is to uncover the secrets of his treasures. It can be seen on reels 2, 3, and 4. Getting all three bonus symbols will trigger one of the bonus games available.

This casino slot has three bonus games, namely: Map Quest, Prize Picker, and Progressive Multiplier Free Spins. Any of the three games can be triggered in the base game, but only by getting all three Bonus symbols.

The Map Quest’s goal is for you to reach the castle before you hit Game Over on the wheel of fortune. The map has a total of 23 points and potential prizes, and you can only move when you get the corresponding steps on the wheel. When you reach the castle, the sum of all points you got on the quest will be yours.

The Prize Picker is the easiest and quickest of all the bonus games. You only have to pick one out of three paintings to get the award it represents.

The Progressive Multiplier Free Spins awards the player with 12 free spins, which has a starting multiplier of 1x. After every round, the multiplier goes up by 1 and the wins are multiplied according to it. Getting three bonus symbols in the bonus game can award another 12 free spins, to a total of 60.

All bonus games have a gamble option, where you can risk your winnings to get up to 5x more. That’s the tricky part though. In the case of 5x, you only have a 1 out of 5 chances to win, the other four being Game Over. So if you don’t want to take the risk, you can always opt to collect your winnings.

Pragmatic Play has brought us yet another adventure through Da Vinci’s Treasure Bitcoin Slot. The graphics have a rustic yet elegant feel to it, and the animation is smooth and clean. It utilizes gold, purple, green, silver, and maroon as a colour scheme, which adds to the rusticness of the game.

The actions of the characters, as well as the objects in the reels, are very entertaining. For instance, when you land on a combination of John Hunters, he tips his fedora toward you to signify your win.

The theme of the game is well thought of. Since the game revolves around the idea of a treasure hunt, the providers used maps, a compass, and a candle as the main background of the base game. The backgrounds of the bonus games are also well in line with the theme, especially the studio where paintings and other art materials can be found. They even featured the Mona Lisa and the Cryptex, Leonardo Da Vinci’s masterpieces.

Da Vinci’s Treasure allows you to maximize the experience of a real treasure hunt adventure through the inviting visuals as well as the exciting music it offers.

Deciphering the secrets of treasures used to take hours, even days, but not anymore. With the casino slots Da Vinci’s Treasure, these secrets can be discovered with just a few clicks of a button. From treasure hunting, to map quests, to art history, Da Vinci’s Treasure slots has got you covered.

Pragmatic Play has done it again with Da Vinci’s Treasure, which is one of the many popular games they have created. If you liked the thrill of an adventure, you should check out Journey to the West or Mighty Kong.