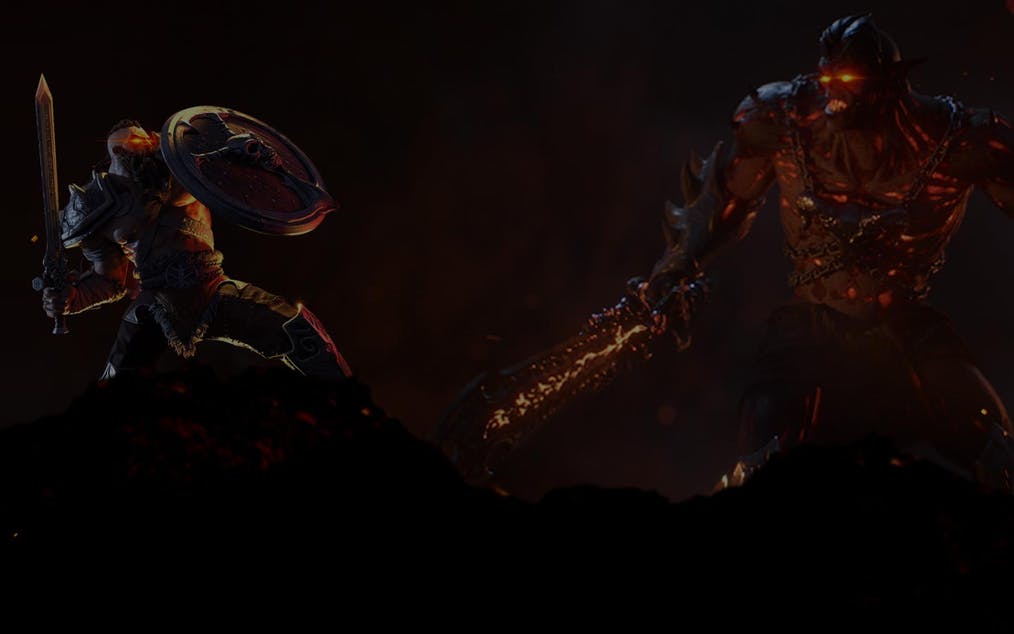 In the depths of hell, 4 Vikings venture deeper than any man ever has before in search of gold and glory worthy of a deity.

You’ve joined these Vikings through it all, venturing out onto cold Nordic seas in Vikings Go Berzerk to facing the jungles in Vikings Go Wild. In their grandest adventure of all time, they will come face-to-face with demons for a chance to win their biggest reward yet—€375,000.

Get ready to go Berzerk one last time as you join the Vikings on a quest that will change their lives—and potentially yours—forever.

Vikings Go to Hell is a 5-reel slot game featuring Yggdrasil’s infamous Vikings as they venture into hell to face against demons.

The basic symbols used are various weapons. Each has its own payouts for every winning combination based on the max bet:

Then we have the Vikings themselves: the Blue Archer, Green Axeman, Red Swordsman, and Purple Mauler. Each of them has their own payouts for winning combinations based on the max bet:

Landing 2 Free Spins symbols starts a Fight between the Vikings on-screen and the demon, adding points to each Viking’s Rage meter and turning random symbols into sticky Wilds if they defeat the demon. You also get 1 Free Spin.

Whenever you win with a Viking and have that same Viking defeat a Demon in their symbol’s portrait, you collect Rage. If you fill a Viking’s Rage meter, you earn 7 Level 1 Free Spins. Depending on who the Viking with the activated Rage mode is, whenever you win on that Viking during your Free Spins, they will always defeat the demon in their portrait. This turns those same symbols into sticky Wilds.

While in Level 1 Free Spins, winning on a spin and defeating the Lord of Chains takes off 1 of its 3 Health Bars. Once you destroy all 3 Health Bars, not only do you unlock Level 2 Free Spins, you also get the following rewards:

Level 2 Free Spins are even better. With the Lord of Chains defeated, Lucifir has emerged from his lair. You start off with 7 Free Spins, regardless of how many you had left in Level 1. All Wilds from Level 1 are also reset.

In Level 2 Free Spins, defeating Lucifir is the same as defeating the Lord of Chains. However, destroying 1 health bar also gives you 1 random sticky Wild. When you’ve defeated Lucifir, you reap the following rewards:

On random occasion, a gold, malformed chest resembling a demon’s skull lands on the 5th reel. This awards you with a stone tablet. There are two types of these:

The rewards you can receive from either of these two tablets range from the following, depending on which mode you’re in:

Contrary to popular belief, hell is not a flaming red-hot pit of endless magma. As the Vikings Go to Hell slot game shows, hell is a vast landscape of molten rock with magmatic veins pouring out of the cracks, all of which is drowned in a deep-blue haze. Only when you face the ultimate demon Lucifir will you witness his territory in the earth’s core. There, magma rains from the sky and flows around you in rivers.

Framing the slot is a stone structure with intricate carvings that take heavy inspiration from classic Norse architecture. As the stone Odin statue looms above as you play, know that you have the gods watching over you and the Vikings you accompany.

The music is tense and suspenseful with strong beats that get the blood pumping and your heart racing. It’s only fair that the Vikings’ biggest quest has the most intense musical score among the available Vikings games to set the tone and solidify the atmosphere.

The Vikings have gone through worse. After everything they’ve been through, fighting their way through hell is a walk in the park. Each Golden Chest leads them closer to their goal and the chance to win €375,000 is already within reach. Through thick and thin, the Vikings have remained loyal to who they are and what they fight for. Now it’s time for them to reap the rewards they have sowed and you are here to help them.

When all is said and done, the adventures don’t need to end. Venture into the Valley of the Gods and enter the Dark Vortex within the grand temple for a chance at winning rewards worthy of a god. You won’t know where it takes you until you see for yourself.