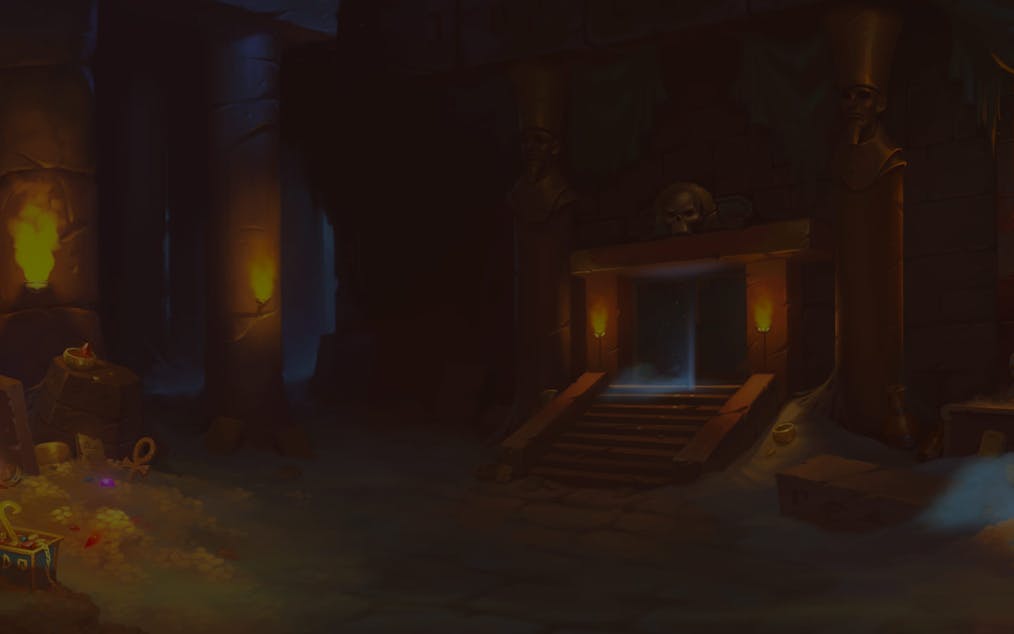 The Pharaoh is Out of Control in Tut’s Twister

Rumour has it that King Tut is a walking corpse in his pyramid. This mysterious phenomenon piques your curiosity as you explore the depths of the ancient Egyptian pyramids.. After getting through all the traps, you finally arrive at the King’s Chamber. You approach his sarcophagus and he’s nowhere to be found! A blinding, blue whirlwind spins in and there he is — King Tut in the ‘flesh’! Now enraged, he summons a slots game trap!

Adventurers travel to the pyramids to witness this spectacle of rebirth with an RTP of 97.1%. Those who encountered the pharaoh played his Tut’s Twister bitcoin slot and some were lucky to escape with a jackpot up to €125,000. The useful Tut’s Twister feature summons walking wilds and respins to assist you in getting rewards while you escape. Now it’s your turn to face the wrath of King Tut in casino slot Tut’s Twister.

Casino slot Tut’s Twister is a whirlwind full of treasure! In a 4x5 reel, the pharaoh’s precious riches can be obtained through 25 fixed paylines. Before you start, you discover two hieroglyphs that will be useful in triggering the beneficial Tut’s Twister feature. You can decide whether or not to bet a minimum amount of €0.10 or a maximum of €125 to get through the mighty pharaoh’s challenge.

Sparkling card suits shine in different colours such as blue (diamond), green (clubs), purple (spade), and red (heart). The payouts are listed below based on placing the maximum bet:

Historical objects have high value since they’re rare and dates back to ancient times. Ancient Egyptian items like hieroglyphic scrolls, an emerald ring, a pendant of Horus (falcon), and a bowl of jewels can sell quite well based on the maximum bet:

The Mysteries of the Pharaoh

The head of King Tut’s sarcophagus glares with red, beaming eyes when it’s activated as the Wild symbol. How it works is mysterious because it randomly grants wealthy gifts:

Collect the Treasure from Tut’s Twister!

The Tut’s Twister feature can be triggered by collecting 3 Wild symbols from the reels. Another method that works is collecting the hieroglyphs from the Mystery feature and completing a column set.

The Wilds are Getting Sucked In!

Once the feature has been activated, the column is locked in as a Wild reel. There are unlimited respins and the Wild reel sucks in each Wild until there are no more. The Wild symbols move one reel at a time until it reaches the twister. The Tut’s Twister feature gathers all the Wilds in its grasp then scatters it on the reels when the bitcoin slot’s feature is over.

The Gold has Multiplied!

Every new Wild that is present on the reels adds 1 bar to the multiplier meter found on the right pillar when the Tut’s Twister feature activates. It takes 3 bars to reach the next level in the meter. The multiplier is used for the winning payout of each spin. At the end of the feature, when the summation of the last spin is made including all the Wilds spread out, and it will be multiplied by the value of the multiplier meter.

Tut’s Twister Spins You to the Ancient Pyramids

The cinematics of casino slot Tut’s Twister display amazing 3D graphics through its introduction. It already gives lore to the slots game, showing how King Tut came to challenge you. The beginning of the clip shows no signs of life in the King’s Chamber. The scene pans over to a blue sparking twister that swirls into the room and lands in front of you. The enraged pharaoh, King Tut, grasps onto his khopesh in attack stance until he spots you. His locked on stare and angry shriek can send shivers down your spine.

The animation of the Tut’s Twister bitcoin slot doesn’t stop there. It ventures on to the symbols, sand whirling around each special symbol when triggered. King Tut stands at the sidelines, waking up when he’s greedy from the power of his slots. Wind whistles drift and add to the tense atmosphere between you and the King.

The Final Chapter of Tut’s Twister

The animation and graphics of Tut’s Twister bitcoin slot are a huge point for why this game is spectacular. It sends the player to a casino slot story about the pharaoh’s rage and his power, the Tut’s Twister feature. His twister can send you huge payouts with its Walking Wilds and Multipliers. There is more to learn about ancient Egypt in Yggdrasil’s Valley of Gods and you can travel to other deserts in Sahara Nights.