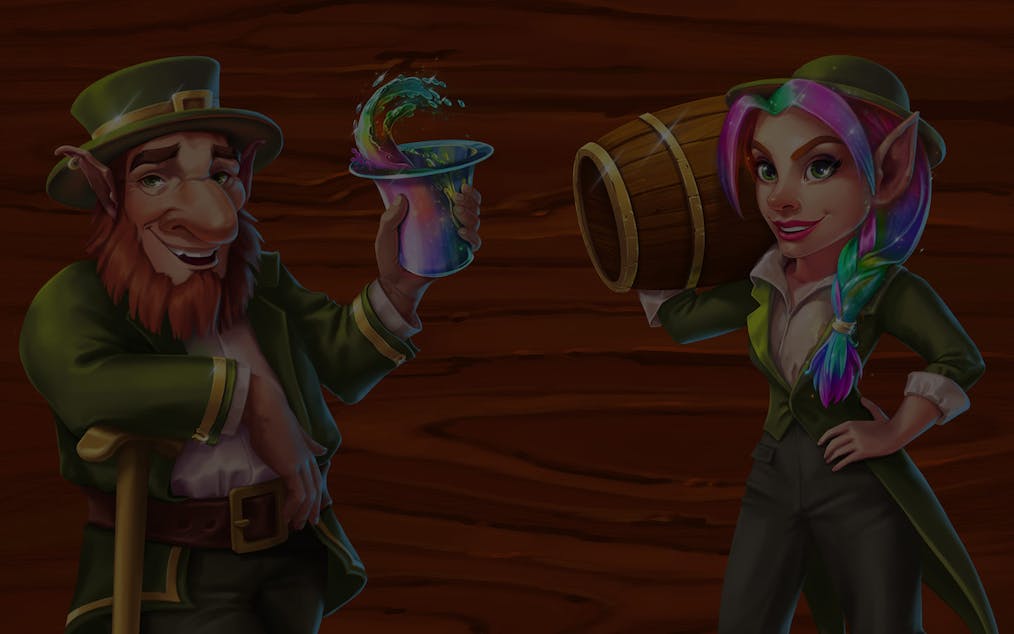 Find a Pot of Gold at the End of Rainbrew

In the fairy world, Leprechauns are known to be the wealthiest creatures. According to some legends, when people follow the end of the rainbow, they will find a pot that belongs to a Leprechaun containing gold. Spin the reels and win a jackpot 2,500 times your bet when you spin with the Leprechaun at Rainbrew slot.

Spin Rainbrew and you will have a chance to arrive with more than just a pot of gold. You will have a potential of 2,500 times your bet doubled by the egg-citing bonuses and features if you manage to trigger the Leprechaun’s lucky bonuses hidden in the reels.

Rainbrew bitcoin slot will get you drunk with excitement as you spin it. It has 5 reels and 243 paylines with an RTP of 96.02%. You can have fun with the Leprechaun and his companion with a minimum bet of 0.01 and a maximum bet of 100.

The regular paying symbols in the game are represented by golden Celtic symbols with coloured stones attached to a wooden base. The symbols correspond to the amount payout you can win based on your total bet.

The high paying symbols in Rainbrew bitcoin slot are represented by magical items owned by the Leprechaun. The symbols are a wooden barrel, a beer glass, a wooden pipe, a female Leprechaun, and the Leprechaun himself. Each symbol represents the payout amount you can win based on the maximum bet:

You can find three different Wilds in casino slot Rainbrew. These are Regular Wilds, Top Wilds, and Bottom Wilds. These wilds are presented in gold frames engraved with Celtic accents. The wilds are differentiated by the coloured stones attached on the frames.

The Wild symbols substitute for all the symbols in the game except for Free Spins. The Regular wild only appears on the horizontal reels.

Sidewinder is another feature activated when you trigger the Wild symbols and Free Spins in casino slot Rainbrew.

The Leprechaun and his ever-loyal companion will welcome you into his laboratory where he brews his favourite drink. He will make you taste the concoctions that he brewed himself. When you enter his house, you will see the machine where he makes his rare drinks. You will see large tubes filled with blue and green liquid.

The borders are made of connected tubes made from brass. The right side of it is supported by an antique wooden frame with intricate engravings. The symbols displayed are comprised of Celtic symbols and the Leprechaun’s personal things.

The Leprechaun’s items play as the high paying symbols in the Rainbrew bitcoin slot. The symbols are a barrel, a wooden pipe, and a beer glass. All the items are used by the Leprechaun to contain his colourful concoctions.

The slot game is accompanied by a merry tune that will make you dance. The music is something that will remind you of exciting festivals and events celebrated by Irish people.

Microgaming’s Rainbrew bitcoin slot will get you drunk with wins as you spin the reels at an RTP of 96.02%. It has 5 reels and 243 paylines that will surely reward you with good payouts. Just don’t get too drunk so you can spot the bonuses and features that can further increase your wins.

If you need more luck to bag more gold, you can visit the Lucky Fairy at the Fairies Forest ask for her magic and guidance. If she gives you helpful advice, thank her by giving her So Much Candy because she has a sweet tooth.