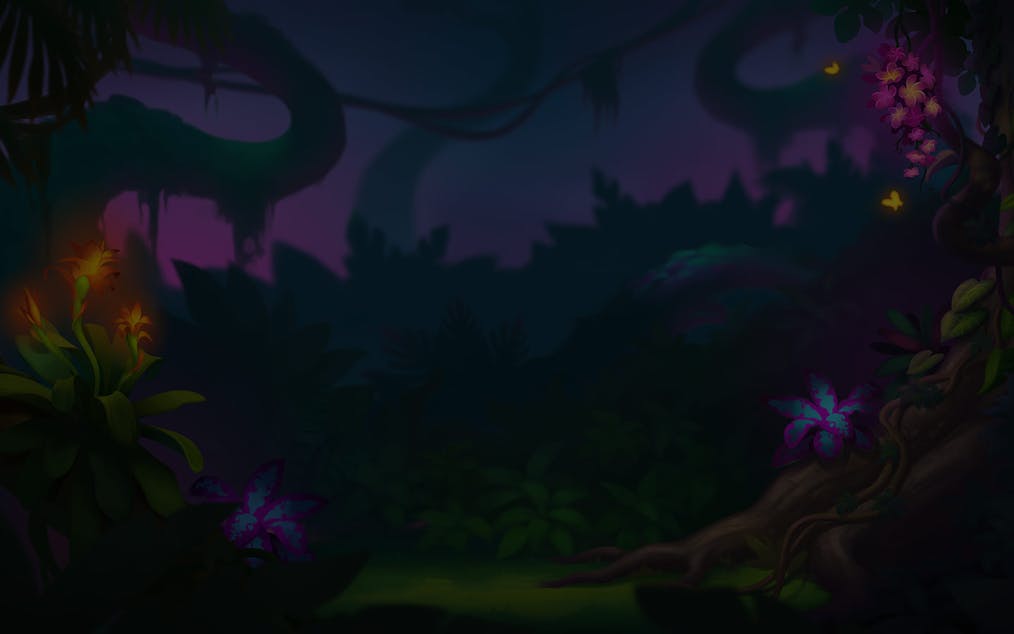 Step inside a magical garden where fireflies and glowing flowers illuminate the night! Make your way inside the dense tropical forest and catch buzzing wins in casino slot Multifly!

Let your jaw drop from astonishment as you spin the reels at an RTP of 96.3%. Try your luck in winning as much as 10,000x your wager when you enter the enchanting forest!

Multifly: Catch Your Own Dinner

Discover uniquely beautiful flora and fauna when you spin the 5 reels of casino slot Multifly! Land at least 3 matching symbols on adjacent reels to score instant prizes. Set your bet from 0.10 credits to the maximum of 100 credits before starting the game!

Emblazoned on grey slate are the card figures that act as the game’s low-paying symbols. Find 9, 10, Jack (J), Queen (Q), King (K), and Ace (A) as they decorate the reels of Multifly bitcoin slot!

Immerse in the dense Latin American forests where you’ll find the high-paying symbols of the game. Expect to find exotic bug-eating animals such as lizards and frogs here. Find colourful birds like the huge-beaked toucan and vivacious parrot when you play Multifly bitcoin slot!

The Wild substitutes all symbols in the game and increases the reel multiplier whenever it lands on the reels.

A chameleon acts as the Scatter symbols of Multifly bitcoin slot. Land at least 3 Scatters anywhere on the reels to activate the Free Spins feature!

Whenever you land a winning set of symbols, they are removed from the reels and an additional Wild is added to the reels. New symbols drop to give you another chance of landing winning symbols. The multiplier counter on each reel adds on as long as new symbols drop from the top.

Multifly: Welcome to the Jungle

Let the colourful bunch of chameleons welcome you to the tropical jungle where only the fittest creatures survive. Be enchanted by the glowing flora that surrounds the reels at all sides. Find exotic plants as you walk alongside trees as thick as trucks while luminous insects illuminate the early night. As expected from Yggdrasil, alluring animations play in between wins. The game’s exquisite visual design lures you inside this nature-themed slot where fireflies light the way.

Journey to the other end of the world and end up discovering an enchanted forest where chameleons guard rewarding reels! Present an offering or two to the captivating guardians and increase your chances of winning as much as 10,000x your wager.

Cast a light into the underground world of Dwarf Mine and find the elusive Trolls Bridge!