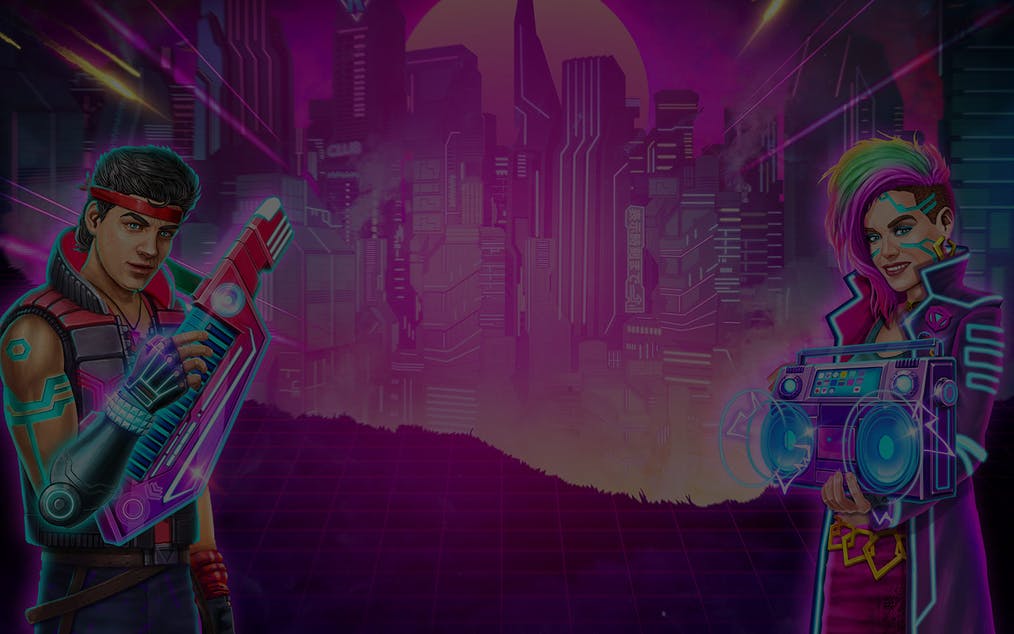 Enter the futuristic cyber world when you play Attack on Retro

The line between humans and artificial intelligence is coming into a blur. Help Billy and Jesse to destroy the menacing robots that are out to eradicate humanity! It has been said that the bounty fee for each robot head is around 5,000x your bet.

Take a leap of faith and enter the mysterious futuristic cyber world of humans and technology. The great advancement has changed a lot in the world, which means that you need to study what it is like to live in the cyber world. Learn more about the 5 reels and the various winning combinations you can make for a chance to land massive wins.

Zoom into the futuristic world of Attack on Retro

A world where humans and technology work together is a world unknown. Discover more of it by learning the symbols you can find in Attack on Retro Hyperspins. Moreover, each one has varying payouts that will make your mind blow out of surprise! For just a minimum wager of €0.10, you get to enjoy the brightly-lit reels of the game.

Face cards such as Jack (J), Queen (Q), King (K) and Ace (A) act as the low-paying symbols of this game. The designs of each one have a futuristic vibe that goes along with the theme of the game.

Equip yourself with the must-have objects in the cyber-futuristic world! You will need a mechanical hand, boombox, keytar and an awesome keyboard.

In the casino slot Attack on Retro Hyperspins, Billy and Jesse act as the Wild symbols on the reels. Both can substitute all symbols except for one another as well as Scatters. Aside from that, they can appear on all reels and occupy 1 to 3 rows, depending on their placement. Additionally, here are the payouts for Billy and Jesse Wild symbols:

On top of that, Billy and Jesse can combine their powers to give you a Mixed Wild win! Here is a list of payouts for this combination:

Scatter symbols will appear on reels 2, 3 and 4 as a triangle with ‘Free Spins’ overlayed on top. Landing 3 Scatters will reward you with Free Spins and a multiplier of 2x your bet.

The Random Wilds feature can occur on any spin and shows up to 15 robots on the reels. When a laser hits one of these robots, a Wild symbol will take its place, which also means that you can reveal up to 15 Wilds in the base game alone.

Attack on Retro: A world of cyborgs, halogens and nanotech

A colourful and purple-dominant colour scheme flashes on your screen as you enter the game. Alongside that, you will hear synth-heavy music that immerses you into a futuristic setting. Moreover, the artwork and visual style of the casino slot Attack on Retro Hyperspins appears as if a person travelled into the future and back.

Be an edge runner in Attack on Retro to live life on the edge!

The best time to launch an attack on the robots is during the Assassin Moon. This is when they are all down and vulnerable for you to strike! The future and survival of humanity are in your hands. So make sure you give it your all since your adventures will be documented in the Wicked Tales: Dark Red.