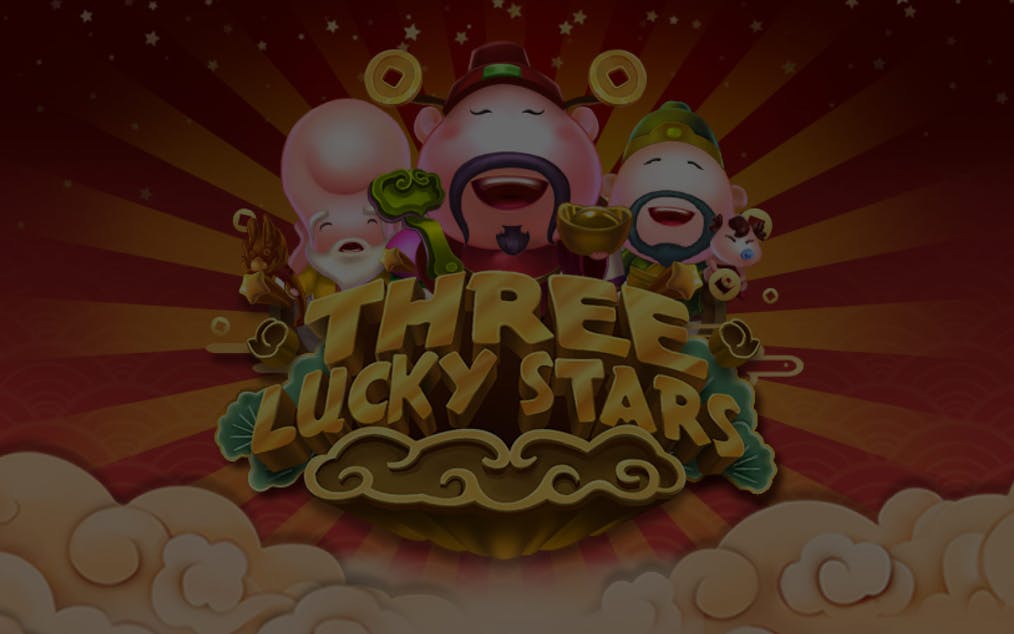 In the high heavens, there are Three Lucky Stars who watch over the progress of every human being. Tired from all the work, they decided to take a holiday on Earth and host a huge party for everyone. At this party, you can win a ton of prizes and gold from the Three Lucky Stars in this bitcoin slot!

Meet Three Lucky Stars who have descended to Earth for the holidays. They’re planning on hosting a party where their guests are rewarded in a casino slot game and you’re invited. Pray that you’ll be blessed by the Three Lucky Stars bitcoin slot so you can get the opportunity to win riches worth 300x the total bet!

In the casino slot Three Lucky Stars, it displays a traditional slot format of 3 reels and 1 row. You can only win from one payline at the center of the reels and only the highest winning combination is paid.

At the party, the Three Lucky Stars offer standard symbols for you in this bitcoin slot to win from such as peaches, scrolls, and a green paddle. All these symbols offer wonderful payouts when you land a set on the payline.

Use the following payout values to calculate the total payout will receive based on your initial wager:

Three golden medallions with Chinese characters written on it can give you instant rewards in casino slot Three Lucky Stars. Land any of the golden medallion symbols on the reels and it will grant a multiplier for your total wager:

These coloured Chinese character coins appear in specific reels—green in reel 1, blue in reel 2, and blue in reel 3 only. When you combine these symbols in a payline, it gives the following multipliers:

Attain the highest reward of 300x the total bet by collecting all variations of the gold medallions in a single payline.

Three Lucky Stars: Up in the Heavenly Clouds

Above the heavens, the sky is coloured a lucky red in this casino slot, where the Three Lucky Stars reside. The party is held in a sea of clouds and stars with their gifts distributed on the 3 reels. You can meet the Three Lucky Stars here because you can see them laughing on top of the reels. Each of these jolly men hold the standard symbols in their hands to share their joy of luckiness and wealth to you.

Three Lucky Stars: A Rich Party in the Stars

Accept the Three Lucky Stars’ invitation to their bitcoin slot party so you have a chance of getting richer by up to 300x the total bet you place. They keep the reels simple so anyone can enjoy playing it. They offer instant party rewards when you find one of their lucky gold medallions on the reels. Celebrate the occasion by dancing with a Festive Lion and maybe its luck will pass on to you so you can win Double Fortunes!