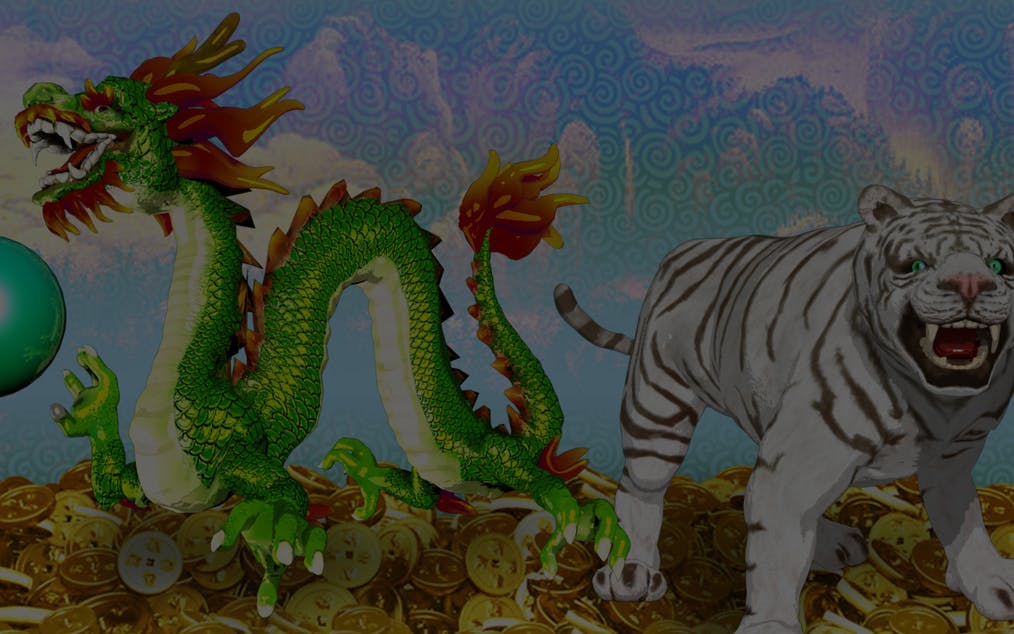 Chinese proverbs are full of knowledge masked in quirky imageries. One famous proverb goes: ‘A dragon will be teased by a shrimp in shallow water while a tiger will be bullied by a dog on a treeless plain.’ This interesting word-painting draws a rudimentary truth about thriving in your own territory. Experience another creative take of this Chinese proverb in casino slot Double Fortunes!

Get this Chinese proverb into practice! Transform this video slot game into your territory of good luck and prosperity. From there, watch your fortunes flourish into substantial amounts of prizes that can go up to 30,000 times your stake.

Take the reels of Double Fortunes bitcoin slot for a spin at an RTP of 96.99% with a lucky wager. Start accumulating massive payouts through a compatible device that you prefer such as your desktop, tablet, or mobile phone.

Meet the Bringers of Good Luck and Double Fortunes

Two of the most revered mythical creatures in Chinese culture will join forces to deliver you good luck and fortune. With their immense and ferocious power, they’ll bless the slot grid of casino slot Double Fortunes with riches abound.

Double Fortunes bitcoin slot features 5 reels and 3 rows to facilitate your winnings. There are also 25 paylines where you can anticipate winning combinations after combinations in every spin of the reels.

Before anything else, offer the bringers of good luck and fortune a wager that can amount between the minimum bet of 0.50 credit to a maximum of 100 credits. Take the reels for a spin at an RTP of 96.99% and watch out for wins like no other!

Land at least 3 similar symbols on any of the active paylines for a win. Regular winning combinations reward payouts from the leftmost to the right of the reels of this video slot game. All wins are multiplied by the bet per line.

Cards of the highest value in a deck function as the low paying symbols of casino slot Double Fortunes. These consist of Jack (J), Queen (Q), King (K), and Ace (A). To know more about their bet values, you can refer to the information listed in the table below:


On the other hand, the high paying symbols of Double Fortunes bitcoin slot are illustrated as auspicious symbols in the Chinese culture. They are red fans, golden drums, sycees, and cranes. Their corresponding bet values can be viewed in the table that follows:


A dragon in the colour of jade serves as the Wild symbol of casino slot Double Fortunes. With its mighty power, it can interchange with all the symbols to complete a winning combination on an active payline. However, this excludes the Scatter symbol. You can watch out for the jade dragon in the second, third, and fourth reels of the video slot game.

The Wild symbol also has the power to activate the Dragon feature of Double Fortunes bitcoin slot. It will initiate when Wild symbols appear on the second, third, and fourth reels at the same time.

Moreover, there is the Scatter symbol depicted as the ever-elusive white tiger. This symbol can appear at random anywhere in the reels of casino slot Double Fortunes. If you land 3 or more Scatter symbols anywhere on the reels, you will activate the Tiger Feature.

Get a chance to accumulate greater amounts of prizes with the help of the Tiger Feature. Upon initiation, you need to select one of the five cards displayed on the screen. Each of the cards has a hidden prize that you can obtain.

The selection process will be repeated until the ‘Collect’ card is selected. All revealed prizes will be added up and given out to you at the end of the feature. This feature can also be triggered during the Dragon feature.

Adventure awaits in casino slot Double Fortunes, an Oriental-themed video slot game that will impress you to no end. Be blessed from the presence of two mythical creatures that greatly influence Chinese culture.

Feel immense luck in playing with the vivid symbols of this video slot game displayed as items of good luck. The illustration behind the reels is designed to look like a painting of a Chinese landscape. Get a glimpse of bamboo shoots in the backdrop as well as in the borders of the reels. It’s a thrilling encounter that you will want to experience!

With the combined power of the jade dragon and white tiger, accumulate massive payouts that can amount to 30,000 times your stake in Double Fortunes bitcoin slot. Place a wager that you deem worthy of the creatures’ presence and spin the reels at an RTP of 96.99%.

Immerse yourself with different cultures and adventures in Spade Gaming’s extensive collection of video slot games. Excavate the proud pyramid of the King Pharaoh and collect riches like no other. You can also join Alibaba in his adventure in the cave of wonders.