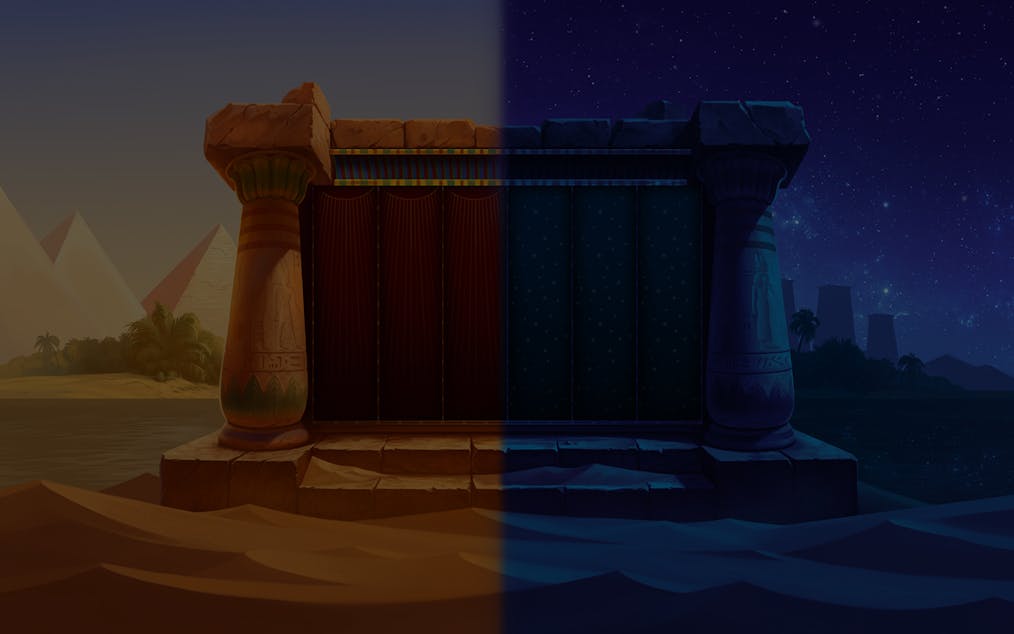 Be a part of a heavenly spectacle in Day and Night

Witness a magnificent battle between two of the most powerful deities in the Egyptian pantheon when you spin casino slot Day and Night. Defy mortality and ascend in the heavens because the Ra and Bastet can grant you a jackpot worth 12,500x your wager!

The clouds are rumbling and the earth is shaking from the showdown of two of the most revered gods in Egypt—Ra and Bastet. Wager between 0.01 and 280 credits to show your respect to activate the hidden treasures, game features, and high payouts on the reels.

Experience the rush and adventure when you play this video slot by Trulab using your mobile, PC, and tablet.

Day and Night: A heavenly dance between Bastet and Ra

A heavenly spectacle is happening in the gods’ lair and you have a front-row seat to witness this once-in-a-life event. Place an offering between 0.01 and 280 credits to receive the blessings and fortunes from Ra and Bastet at an RTP of 96.38%. Win their favour because these two deities have the power to zap you an astounding jackpot with 12,500x your wager.

Chaos is brewing in the heavens and the gods need your help to locate the standard paying symbols on the reels. Land Jack, Queen, King and Ace on the grids and obtain the following credits based on the maximum wager you stake:

Meanwhile, the high paying symbols in casino slot Day and Night are represented by the special treasures hidden in the pantheon. Find these magical items before your enemies do and obtain the following credits based on the maximum wager:

The highest paying symbols in casino slot Day and Night are no other than the two gods, Ra and Bastet. Summon them on the reels and obtain the following credits based on the maximum wager:

Day and Night bitcoin slot features a Day Free Spins feature where Ra will grant you 10 Day spins when you land 1 to 24 Ra Wilds. This feature cannot be reactivated. Meanwhile, Bastet can also grant you 10 Night Spins where all the wilds will transform into Sticky Wilds.

Day and Night bitcoin slot is an exciting game that boasts engaging and visually-appealing graphics that adds to the fun. Set against a dark backdrop, the reels are made of simple frames adorned with stones and hieroglyphics.

On both sides, you will see the beautiful Bastet in an elegant pose surrounded by mystical lights. She has a big moon atop her head where she gets her powers. Meanwhile, Ra is on the left side, bearing the power of the sun on his shoulders.

Learn the secrets of the gods in Day and Night

Spin Day and Night bitcoin slot and Sunstrike all the rewards that Bastet and Ra have in store for you. Roll the Magic Dice and reap all the blessings from the two deities.