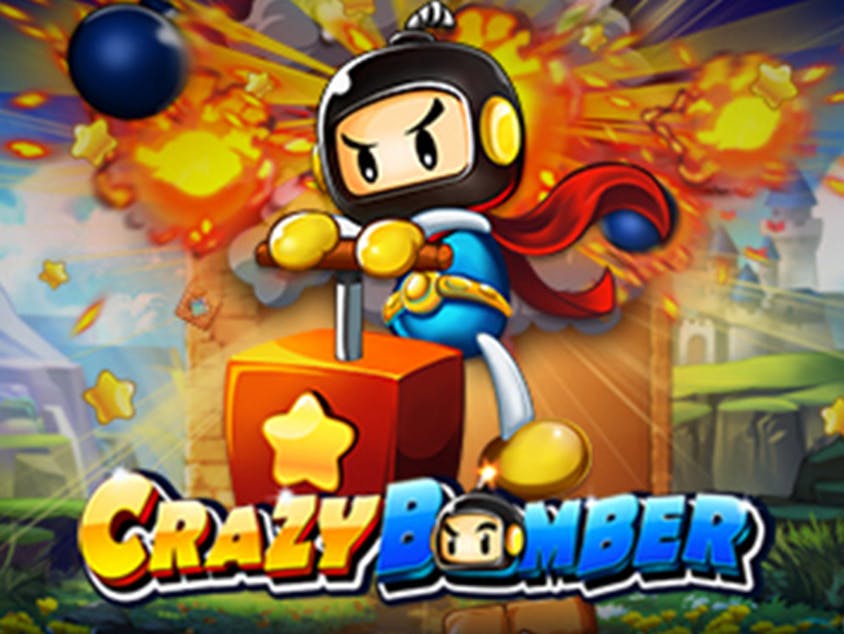 Save the kingdom and find the stolen treasures in casino slot Crazy Bomber. Help Hero Bomber fight against the evil creatures lurking around the empire and be rewarded with a jackpot prize worth 200x your stake!

Be rewarded tremendously when you spin the reels. Form winning combinations and bag the jackpot prize worth 1,000x your stake. Experience an explosion of fortune today. Place your bets now!

The stolen treasures come in the form of low-paying symbols such as Diamond, Club, Heart and Spade. Collect matching symbols on the reels in sets of 4 or more and receive the following payouts on the maximum bet:

Dive deep into the ocean and meet sea creatures that appear as the high-paying symbols of this game. Find Blue Fish, Turtle, Purple Jellyfish, Red Octopus, Yellow Crab and Blue Tomb on the reels. Here are the following payouts for each symbol on the maximum bet:

Activate the Special Wild Feature to accumulate more winnings on the reels! It is divided into three categories such as regular Wilds, Vertical and Horizontal Wilds and Exploding Wilds.

The regular wilds appear as a ticking bomb on the reels and substitutes all symbols except the Bomber coin. It expands at the top and right reel on every win and gives payouts for each expansion. Get ready to receive more rewards once you land them inside a winning combination!

On the other hand, vertical and horizontal wilds only appear in a 7x7 grid. It diminishes and explodes all symbols in the entire row or column of the reels, paying only symbols that are part of the winning combination.

Lastly, the Exploding Wilds. These wild symbols only appear in an 8x8 grid format, removing all adjacent symbols on the reels through explosion. Land them on the reels and receive drastic wins in no time! All symbols removed from the reels during the explosion are not payable unless part of a winning combination.

Leave the rest to Hero Bomber! Land him 4 or more times on the reels to accumulate the following multipliers:

Travel to the vast grassland of Crazy Bomber

Astonishing graphics and impressive symbols grace the background and reels of casino slot Crazy Bomber. With spectacular views of the kingdom, perceive a huge castle standing at the hilltop of the mountains with thick white walls and blue triangular roof. See the vibrant ombre blue sky engulf the whole kingdom with positivity and witness the grassland breathe relief and happiness to the townspeople.

Become one with the hero and explore the greeneries of casino slot Crazy Bomber. Intensify his strength by landing stolen treasures on the reels and accumulate the jackpot prize worth 1,000x your stake. Your friend Princess Wang is already waiting for you at the Dancing Fever. Go strike that win today!