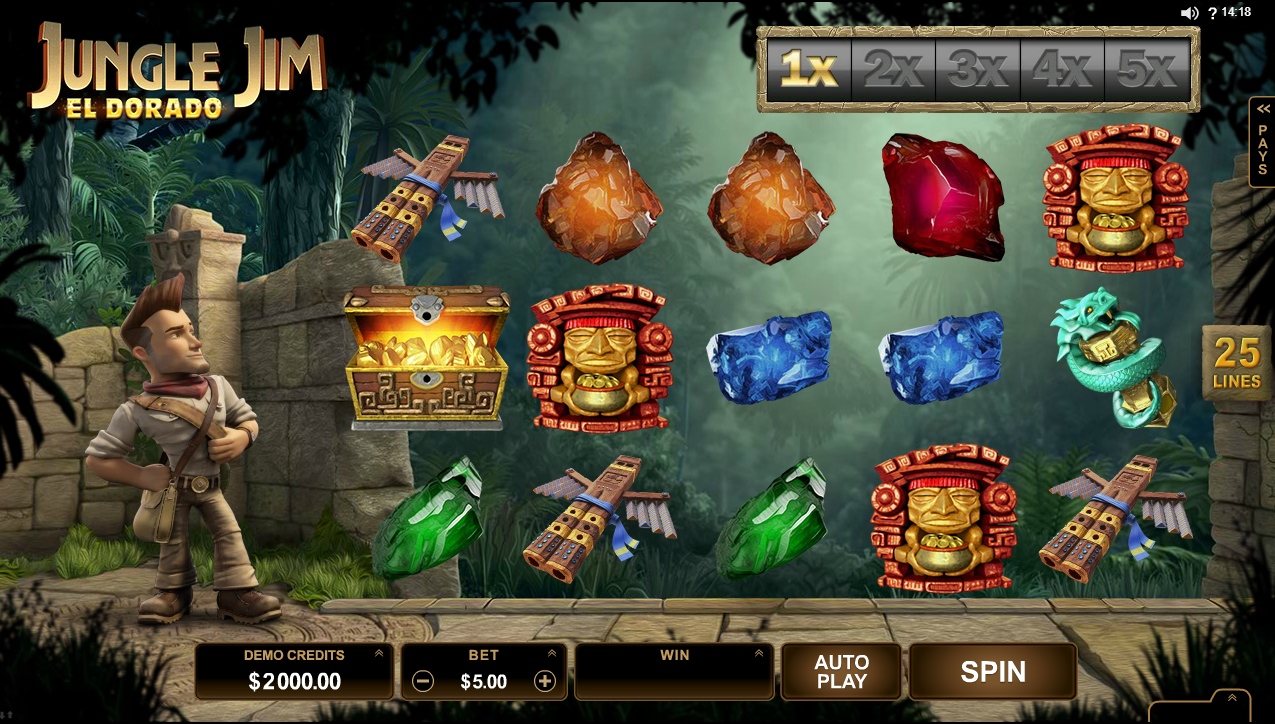 Join Jungle Jim in his search of the teeming ancient treasures, and make your way to substantial BTC prizes awaiting you in ‘Jungle Jim El Dorado’!

Despite a whole lot of virtual slot games existing where the scene set in the dense jungle forests of Central and South America, and the protagonist is busy combing them looking for the golden treasures of ancient civilizations, the entertaining ‘Jungle Jim El Dorado’ slot by Microgaming which basically shares the same scenario, is still more than enjoyable to play. As the game’s name implies, its main character is called Jungle Jim, and our mission is accompanying him in his journey to the legendary land of El Dorado!

This realistically drawn game has 5 reels with 25 paylines on them, and it cool both visually and in terms of generosity of bonuses that players can take advantage of. During the gameplay, we can see Jim himself standing near the ancient ruins found to the left of the reels which levitate in the air. The symbols comprising the reels include a number of items you would normally relate to such kind of slot machine: you get a totem, a snake, a frightening mask, a treasure chest (obviously, no adventure game can do without it), and a set of gems of 4 different colors – the latter standing for lower-value icons.

In ‘Jungle Jim El Dorado’, the wild is represented by the game’s logo, and what it does is substituting any symbols (not the scatter, of course) to enable you to make up a more valuable winning combo. The scatter as such has a form of a mysterious roundish item with some kind of carvings on it, and it’s responsible for triggering the main bonus feature – the Rolling Reels sequence. This can be activated in either base game and free-spins mode. What happens here is whenever you succeed in landing a winning combination on the reels, the symbols it consists of will instantly vanish so as to be replaced with other icons falling upon their place. As a result, there can be more paying combinations for you to build, and it goes on like that. Every win that happens during this mode boosts the multiplier to up to 5x.

The free-spins mode is activated instantly whenever you land 3 scatter symbols anywhere on the reels, and it instantly gets you an award of 10 extra spins (with a possibility to retrigger them). In this sequence, the Rolling Reels multiplier mentioned above can be boosted from 3x to as many as 15x, potentially providing some hugely impressive wins to you!

Vamos Amigos to the Carnaval Festa in Brazil Bomba!