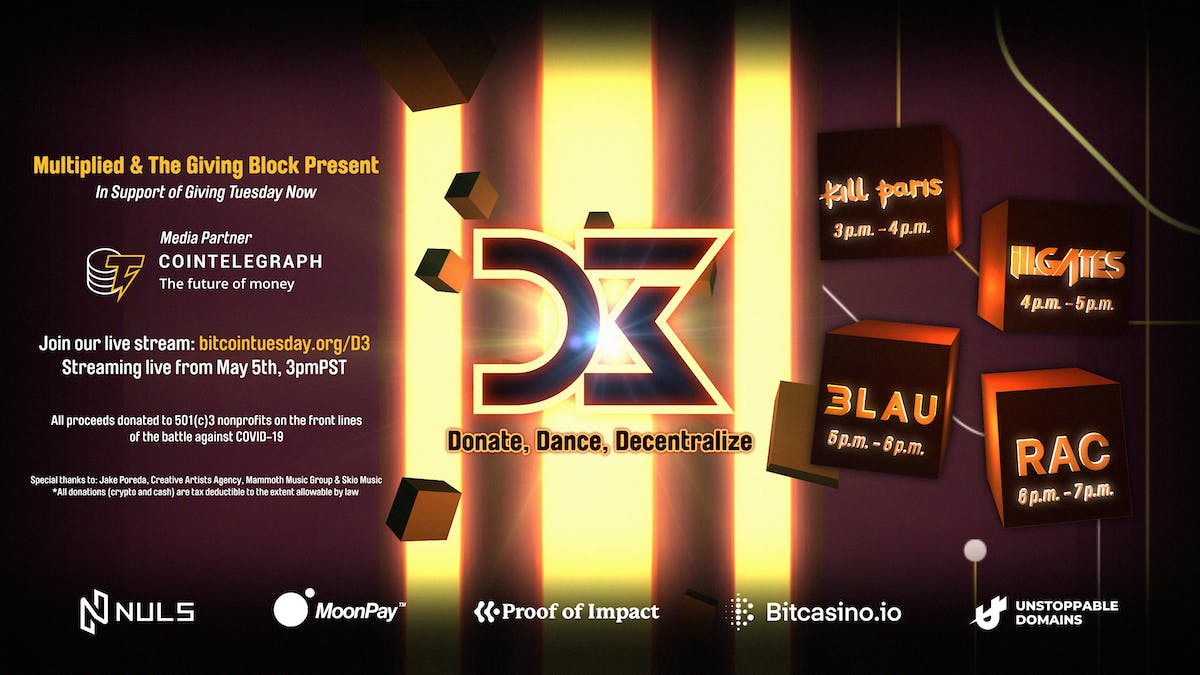 The pioneering Bitcoin-led casino operator, Bitcasino, has announced its support for a virtual relief benefit concert organised by crypto-charity giants The Giving Block. The Giving Tuesday Now event marks a global day of giving and unity that will take place on May 5 as an emergency response to the unprecedented need caused by COVID-19.

In partnership with GivingTuesday’s global network of leaders, patrons and communities this event is set to spark an increase in grassroots generosity, citizen engagement, business and philanthropy activation supporting the fight against COVID-19 around the world - which is something Bitcasino full-heartedly supports. The sponsorship money will aid the organisers in pulling together the event in such a quick turnaround and all leftovers will go to charity.

“Standing with the crypto community and supporting the efforts to tackle COVID-19, which has left a mark on so many lives, is one of the most important things we've ever done.

The human crisis we’re witnessing is something we’ve never challenged before and everyone has been under so much stress, but together we’re stronger in these unprecedented times. Bitcasino has always considered itself a fun, fast and fair crypto company and partnering with GivingTuesday we feel we can help make a difference and bring more generosity to the world.”

The relief benefit concert sponsorship comes after Bitcasino rounds off its three-week-long fundraising campaign ‘Crypto vs COVID-19’ where players had the option to donate their unused loyalty rewards to aid the most vulnerable fight off COVID-19. Bitcasino is set to match the players’ loyalty points total and donate at the beginning of May in the hopes of helping reach Bitcoin Tuesday’s #cryptoCOVID19’s goal of $100,000.

The most common deck of playing cards used today is the standard 52-card deck. There are also countries that use a different set of cards. For instance in Central Europe, they use 32 or 36-card German-suited packs. In Italy, 40 or 48-card Italian suit packs are used. Playing cards were used as early as the 9th century in China because of the game called ‘Game of Leaves.’

Founded in 2014, as part of the Coingaming Group, Bitcasino has an expansive, quality casino product featuring more than 2,700 games, including slots, table games and live dealer casinos from some of the industry’s leading suppliers. These are hosted on its proprietary platform, developed by leading designers and software engineers to create the ultimate user experience for players.

Bitcasino prides itself on its enjoyable and trustworthy casino and gaming service, with withdrawal times of around 1.5 minutes amongst the fastest in the industry and cutting-edge security measures in place.

Take home the trophy in All Star Knockout

Growth of cryptocurrency - still going strong in the time of crisis

What beats a full house in poker?